Picasso once said, “Todo lo que puede ser imaginado es real” (Everything that can be imagined is real). So when Ahmad and Oren imagined a safeguarded space for citizens of Jerusalem where they could express themselves through art and leave behind any cultural, political or religious differences, they made it real.

They first found a rooftop in no man’s land in the old city of Jerusalem. A misused space full of garbage somewhere in between the Christian, Muslim and Jewish quarters. Anyone who has visited or lived in the Holy City, will know that the population usually stays around their own neighborhood and rarely intertwines with their neighbors. So, to find a place which is easily accessed from the different quarters appears to me like a sign that this project, called Jerusalem Art,  was simply meant to be.

The beginnings weren’t easy, with lots of cleaning under the merciless sun of the Middle East, but soon with the help of some volunteers (locals and internationals) they transformed the space in order to make it a home for the art lovers of the city. According to the funders, the goal of Jerusalem Art is to represent the positive values of consensus inherent to the Eternal Universal City , which have no boundaries or restraining definitions: “It operates and believes that culture and art contribute to human connection, dialogue and global understanding.”

By bypassing any religious or political differences, people from Jerusalem Art seek the genuine human connection, and I truly believe that’s why, without even realizing it, I was part of it since I came across the project a few weeks back. Just as Jerusalem cast a spell on me when I visited it for the first time last summer, projects like Jerusalem Art simply inspire you to take action, to bring out the good in you and and showcase it to the world.

My main job so far has consisted in documenting the different meetings and actions that have taken place so far. The first one was a painting of a wall on the rooftop that would represent the different people living in Jerusalem so that everyone would feel welcomed. 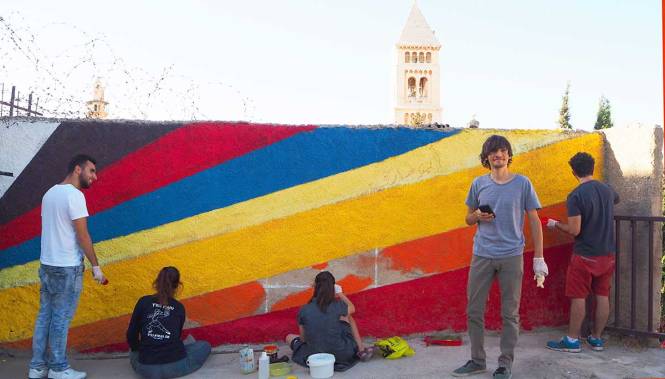 First came the background, a colourful gradient of diagonal stripes with the colors of the Armenian flag in the center. A beautiful way of paying tribute to the smallest of the quarters in the old city, and a people that are usually forgotten in History. Many volunteers from all corners of the world helped with the painting, which came up in bright colors and full of life.

To represent the the essence of the city that would integrate all the different cultures and religions, while trying not wounding sensibilities ( if that’s even possible in Jerusalem), Oren and Ahmad came with a very original idea: the Jerusalem Traditional Dress. According to them, in the early 20th century, women in Palestine wore traditional dresses from their hometowns, and both Arab and Jewish women from Jerusalem would wear the same type of outfit native to the city. Therefore it’s not a symbol that would stand only for a certain religion or culture, but rather a hometown.

In order to include other cultures present in the Holy City, Oren painted the African continent on the chest of the dress to welcome the immigration that arrived from that continent in the past century and also a wheel to represent the Gipsy community.

Jerusalem Art founders know that there is no such thing as perfection while trying to integrate all the different points of view of the city. That’s why they are open to suggestions to see in which ways the painting could help feel represented all the inhabitants of Jerusalem. (If you have any ideas, don’t hesitate to contact them!)

Once the painting was finished, it was time to  take advantage of that privileged spot and spread the word about the project. And that’s how I could celebrate my first ever Iftar on the top of the Holy City with Jews, Muslims, Christians and anyone open to join those observing Ramadan with a shared meal to break the fast. 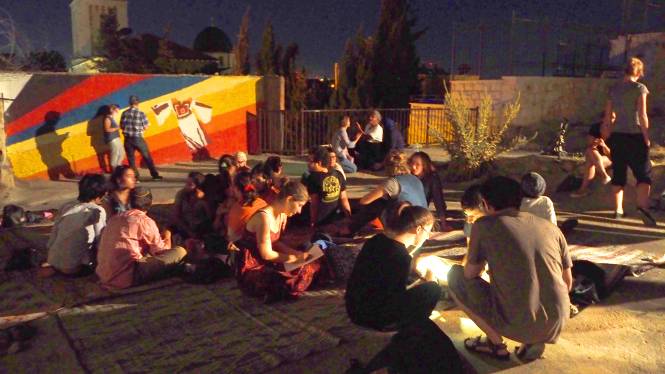 A situation that unfortunately is not easy to reproduce yet with the majority of citizens in Jerusalem, but that came up in such a natural and easy way, that for a few hours we all believed that together anything imaginable is possible.

A Jewish friend of mine reprimanded me the other day because according to him, by working with people from different upbringing and attending to interfaith events all the time, I wasn’t getting to know the real Israel. I get what he means because these are just exceptions to the rule. However, I must object following Picasso’s rule: if a group of us can imagine a different reality, then this reality is real.

2 thoughts on “The Art of Jerusalem”