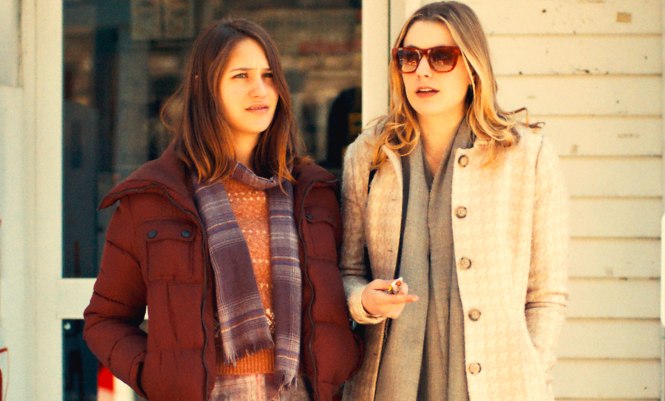 Tracy just started a writing program at Barnard in NYC, however, her life is not what she had dreamed about. The literary club rejected her work, her only friend found himself a jealous girlfriend and being an introvert she dares not join the college party scene on her own. Suddenly, the idea of calling her soon-to-be stepsister Brooke she has never met doesn’t seem such a bad idea.
Brooke, a 30 year-old Times Square resident, turns out to be everything Tracy would dream of being: crazily fun, confident and enchantingly unpredictable. Together they start a fresh and honest friendship while Brooke becomes Tracy’s muse for her new writing piece, Mistress America.

As Michael Mohan perfectly describes in The Talkhouse, “The drama is rarely manufactured from plot, but usually stems from the characters going through some kind of real transition. And somehow he always manages to do this hilariously without ever betraying the characters or dramatic situations.“

It’s true that Baumbach’s movies have a great deal of comedy and you usually find yourself smiling during most of the movie. But Mistress America is seriously hilarious, the whole scene at Dylan and Mamie-Claire’s house (Brooke’s ex-fiancé and ex-best friend respectively) with fast-paced dialogues, perfectly timed puns and twisted plots is simply perfect with absolutely no time for boredom. I remember wishing Woody Allen‘s last movie, Irrational Man, had been anywhere close to this. It’s, as some critics have described, a modern screwball comedy up to the best Capra.

There is something about the characters played by Greta Gerwig in Noah Baumbach films that is incredibly appealing. Brooke in Mistress America as well as Frances in Frances Ha are not successful professionals in a stable relationship like women in their late 20’s or early 30’s should be according to society. Yet, I feel their personality and way of life liberating. Maybe because their success grounds on remaining true to themselves and not so much about meeting some standards.

When we meet Brooke through Tracy’s eyes, she is the definition of confidence and charisma. But even when it seems like, after her fiancé breaks up with her, her life is crumbling down losing her flat and the financial support for her restaurant project, we know she’s gonna make it someway or another. Maybe she’s not that confident about what or how she’s going to do, but she keeps going forward and is not afraid to fail.

That lack of fear of not making it according to some external standards is what drags me the most. Just as Frances finally gave up on her dream of being a professional dancer and accepted a more stable job, Brooke might as well settled for something less romantic than a cozy restaurant with all the hype. However, they will keep dreaming and trying new adventures without getting paralyzed by the fear of failure.

¿Can there be any better feeling than this lack of fear? Watching this movie certainly provided me with some inspiration to meet this engaging mindset.